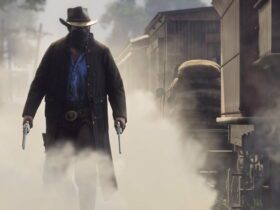 Red Dead Redemption: The Origins Of The John Marston and Abigail Roberts Couple

NASA marks an incredible space milestone thanks to its bold rover Curiosity! The car-sized robot has now been exploring the Red Planet for 9 years.

Curiosity began its journey back in November 2011 and reached Mars’ Gale Crater on August 5, 2012. Ever since, the rover has been offering essential data, helping scientists better understand our planetary neighbor.

Show your support for the Curiosity rover and celebrate with it another amazing milestone!

The Curiosity rover is now ready for more challenges and missions after surviving on Mars for 9 years.

Ever since Curiosity has stepped on the Red Planet, it has been helping scientists figure out many deep-buried secrets of Mars.

For instance, the car-sized rover’s observations have revealed that the Gale Crater once had a lake-and-stream system in the past that could’ve been host life as we know it.

Back in 2014, the rover arrived at the base of Mount Sharp that stands up to 5.5km (3.4 miles) into Mars’ atmosphere from Gale’s core. Shortly after, Curiosity began examining the rock layers as it climbed (how cool is that?).

The rover’s data helped scientists found a part of Mount Sharp rich in sulfate-bearing rocks. Such a thing is proof that the environment is dry.

Moreover, Curiosity analyzed the slopes and discovered harbored clays that can form in the presence of liquid water.


Curiosity has also discovered organic chemicals, the building blocks of life, and methane.

Here on Earth, methane is made mainly by living creatures, so the discovery was really intriguing and shocking.

The Curiosity rover has explored 25.98km on Mars during its 9 years journey. And now is ready for more.

According to NASA, Curiosity is in great health. Its nuclear system is made to run for at least 14 years. So, there’s still a lot to explore on Mars!

Currently, the rover is waiting for more tasks as NASA gets ready to explore Mars more.

Curiosity is not alone on Mars. The Perseverance rover and the Ingenuity helicopter are also enrolled in quite the mission at the Red Planet’s Jezero Crater.