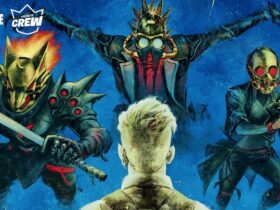 Recent research finds that flowers found wholly preserved in globs of amber grew at the foot of dinosaurs, implying that certain blooming plants in South Africa today have stayed unmodified for 99 million years.

The two blooms flowered initially in what is now Myanmar and may give information on how blooming plants developed – a significant event in the history of life that Charles Darwin famously characterized as an “abominable enigma.”

Flowers are ephemeral: they blossom, turn into a fruit, and fade away. As a result, old flowers aren’t widely represented in the fossil record, making these ancient blossoms and the history they contain more valuable.

Leaves are often generated in more significant quantities than flowers and are considerably more resilient – they have a better potential for preservation, as Robert Spicer, emeritus professor in the School of Environment, Earth, and Ecosystem Sciences at the Open University in the United Kingdom, was the study’s lead author, stated.

At the end of its useful life, a leaf is discarded.

In contrast, he added that a flower transforms into a fruit, which is then eaten or disintegrates as part of the seed dispersal process.

Spicer, a visiting lecturer at China’s Xishuangbanna Tropical Botanical Garden, said that these flowers are almost similar to their contemporary descendants. There aren’t any significant distinctions

Much of life as we know it now is assumed to have been shaped by the development and spread of blooming plants (angiosperms).

According to the research published on Monday in the journal Nature Plants, it resulted in the diversification of insects, amphibians, mammals, and birds.

Flowering plants reproduce faster than other plants and have more complicated breeding methods, such as a broad range of flower shapes, frequently in close ‘partnership’ with pollinators.

As Spicer noted, this causes the mutual coevolution of numerous plant and animal lineages, changing ecosystems.

Darwin was perplexed by the abrupt emergence of flowering plants in the fossil record during the Cretaceous era (145 million to 66 million years ago), with no evident parental lineage from previous geologic periods.

It looked to be in direct opposition to a fundamental component of his natural selection hypothesis – that evolutionary changes occur slowly over a long time.

Darwin characterized it as an “abominable riddle” in a private letter to botanist Joseph Hooker in 1879, published in a 1903 book of Darwin’s correspondence.

According to Spicer, the exact date when blooming plants first appeared is unknown, but the early blossoms preserved in amber provide some insight into the enigma.

The characteristics of the specimens are similar to those observed in blooms in fire-prone locations, such as South Africa’s peculiar fynbos regions.

This ecologically varied and rich location is home to all 150 species of Phylica. They were also discovered near amber containing partly burnt vegetation.

‘Fire Must Have Been Common Occurrence’

Suppose many early flowers were exposed to fires in such semi-arid settings. That case explains why the early stages of angiosperm development are so poorly represented in the fossil record – fossil(s) do not generally form in such semi-dry habitats, as he said.

According to Spicer, the fire must have been a common occurrence over a long time for evolution to mold the flowers into a form that could withstand fire and generate seeds that could make their way through the charred ground surface.

Phylica’s blooms are shielded by leaves that cluster at the twig tip.

While numerous ferns, conifers, and flowering plants observed today, such as plane trees and magnolias, thrived during the dinosaur era, Spicer claims that Phylica piloburmensis was the earliest flowering plant known to have an almost identical cousin surviving today.

Dinosaur-era amber fossils have only been discovered in deposits from Kachin State in northern Myanmar.

Ethical questions regarding the origin of amber from the area have developed in recent years due to human rights violations.

After 2017, when the country’s military seized control of some amber mining sites, the Society of Vertebrate Paleontology recommended a freeze on the study on amber derived from Myanmar.

Spicer said that the amber was purchased from local dealers before to 2016 and was obtained lawfully under the procedures in effect at the time.