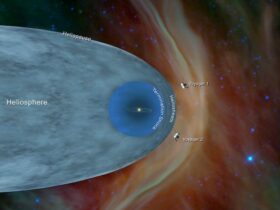 Astronomers Made a 3D Map of Our Solar System’s Heliosphere

Xiaomi plans to refresh its budget-friendly smartphone series following the big launch of its flagship Xiaomi Mi Mix 4 this month.

The company is expected to bring on the market the Redmi 10 lineup, a successor to the Redmi 9. Fresh leaks, along with a listing, reveal now key specs of the phone’s specs and features.

Popular tipster Mukul Sharma has shared on his Twitter some pictures of the upcoming Redmi 10, hinting at a new design.

The leaked photos show a similar camera setup as the previous models and dual-tone back rear. The smartphone appears to sport a sleek, slim form factor and a protruding camera module.

The Redmi 10 is also featuring a punch-hole panel with the selfie camera cutout placed at the center. Other aspects include a 3.5mm headphone jack and a USB Type-C port.

However, as you can notice in the picture above, the upcoming Redmi 10 won’t come with major design changes. The phone series is expected to pack premium specs.

Redmi 10 Specs and Features: What to Expect

As per the new leaks and listing, the Redmi 10 series will pack some mighty specs.

The Redmi 10 is said to flaunt a 6.5-inch panel with FHD+ resolution and a 90Hz refresh rate.

Under the hood, the smartphone might draw its power from the octa-core Helio G88 SoC coupled with 6GB RAM and 120GB space storage.

Coming to camera capabilities, the upcoming Redmi 10 is expected to sport a 50MP main camera with an 8MP sensor and a pair of 2MP sensors.

A battery of 5,000mAh with 18W fast charging support is said to keep the lights on for several hours.

The company is expected to release the first official teasers in the coming weeks!