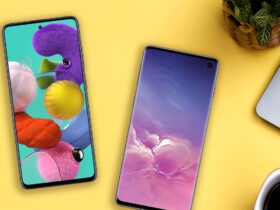 Samsung Galaxy A51 vs. Galaxy S10 – Which One Suits You Best?

Fresh renders of the upcoming Samsung Galaxy S22 Ultra 5G are now available, revealing the smartphone’s incredible design and camera module. The tech giant is expected to take the camera specs to the next level, meaning we might get a larger camera bump.

Thanks to Letsgodigital, we get to see some great concept renders of the next-gen Samsung Galaxy S22 Ultra 5G!

According to the renders, the smartphone will sport a quad-camera module at the rear. The setup is expected to offer a 200MP primary camera, making it the first phone in the world to pack such mighty camera specs. And that’s not all.

Other camera specs and features include:

The display might also feature a punch-hole design for the selfie shooter.

Under the hood, the Samsung Galaxy S22 Ultra 5G will draw its power from the next-gen flagship chipset from Qualcomm/ Exynos, most likely with a mighty GPU based on RDNA2 architecture.

The phone could also feature an active fan similar to gaming smartphones and support for S-Pen.

Samsung is expected to reveal more information in the coming weeks!