Fortnite Season 4’s Mythic & Exotic weapons are the best ones you can add to your Inventory. These guns are mighty and can totally get you where you want: to a 100 % victory!

But as great as that could be, the Mythic and Exotic weapons in Fortnite are not always so easy to get, and you might feel a bit challenged. Fear not, because we’ve come up with a sleek guide on everything you need to know, including how much is a Mythic or an Exotic weapon.

Fortnite Season 4’s Exotic Weapons: How to Get Them?

The Exotic weapons are kind of tricky, and they can be acquired only by trading some sweet Gold Bars with some NPCs around the Island. Since Chapter 3, these NPCs are pretty much static, meaning you won’t have to go to multiple locations. Check out here all the NPCs in Fortnite Chapter 3 Season 4!

As for the Gold Bars, if you want to get more, try completing some Bounties or missions from NPCs.

Keep in mind that the Exotics aren’t as mighty as the Mythic weapons. However, they sure look pretty sleek, so that it won’t hurt having one in your Inventory, right?!

There are only four Exotic weapons in Fortnite Chapter 3 Season 4: 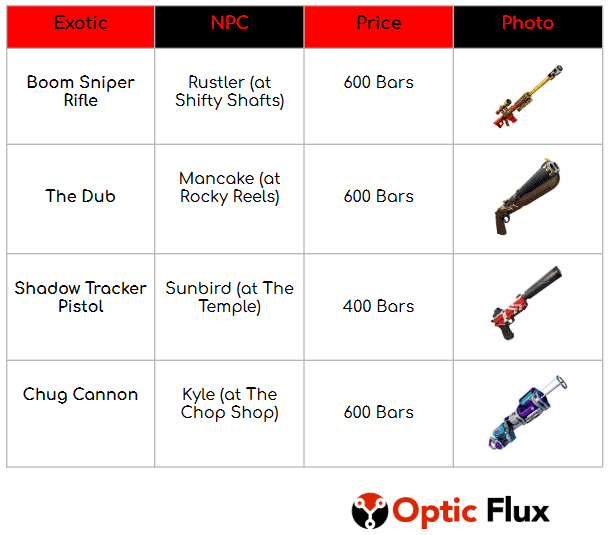 And if you’re still troubled by finding the Exotic weapons’ locations, check out the map below for more details:

All the Exotic weapons can be bought from NPCs only, especially on the northern side of the map! The weapons cost around 400 Bars or 600 Bars.

Fortnite Season 4’s Mythic Weapons: How to Get Them?

Well, we have bad news: there’s only one Mythic weapon in Fortnite Chapter 3 Season 4. Quite disappointing, isn’t it?!

The Mythic weapon is The Herald’s Burst Rifle.

To get The Herald’s Burst Rifle means to take down The Herald boss, which won’t be easy. Head on the northern side of the Herald’s Sanctum POI, where all the action is.